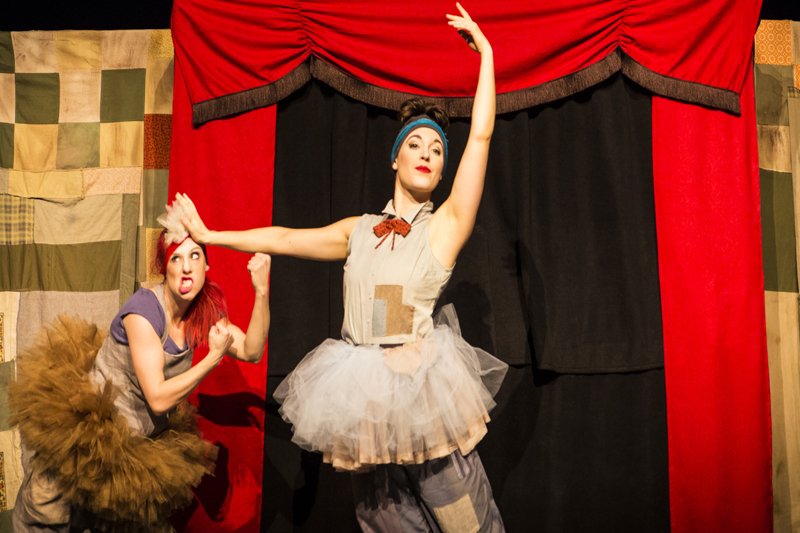 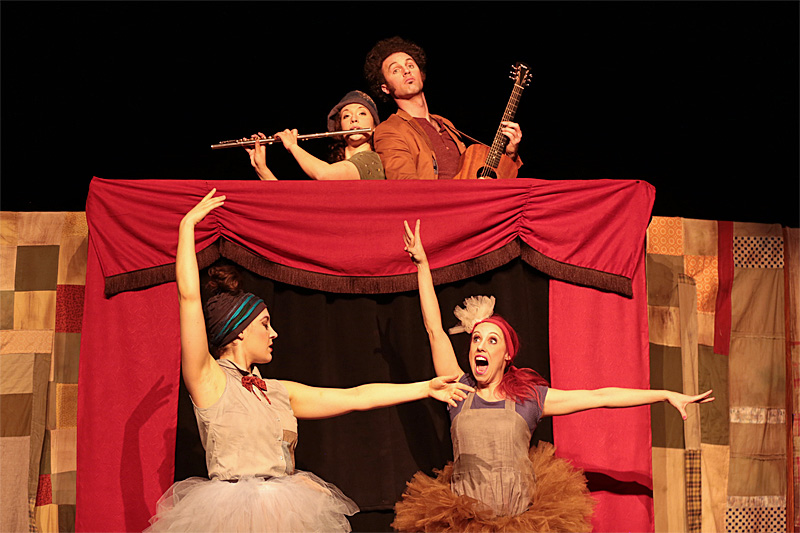 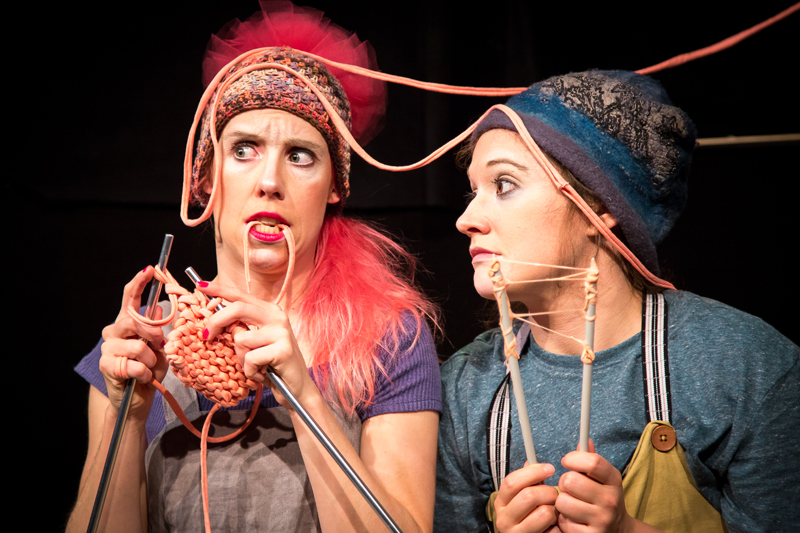 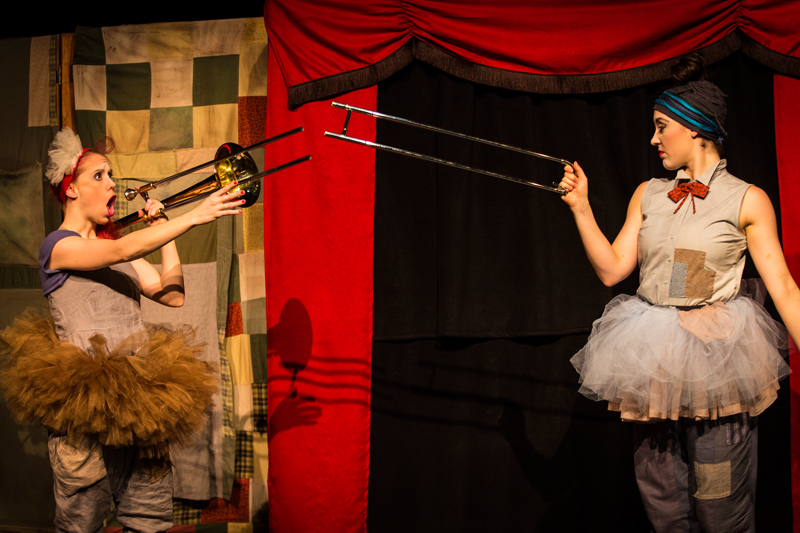 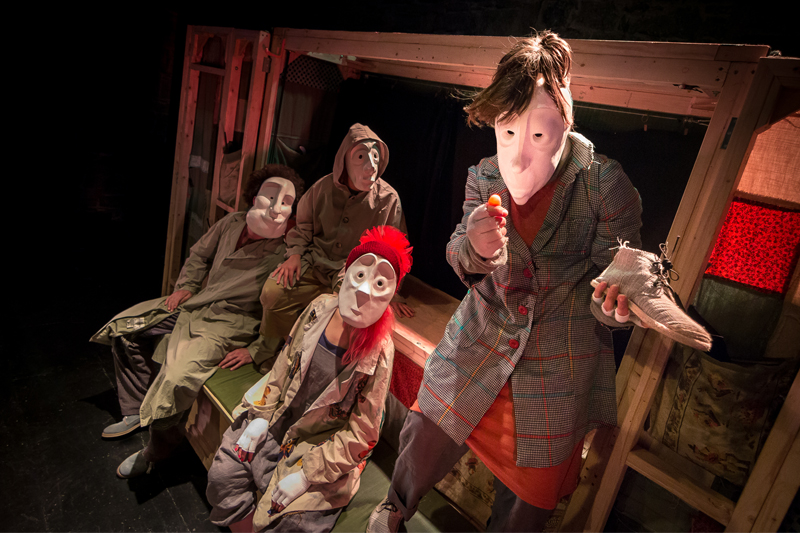 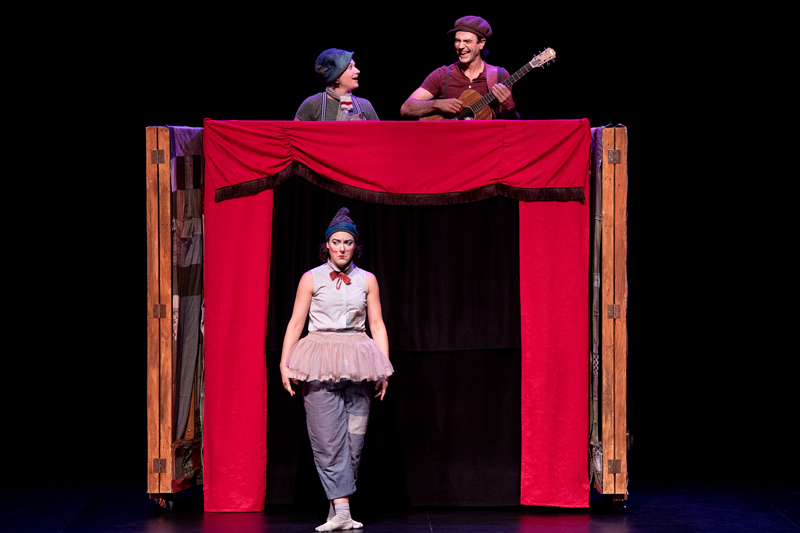 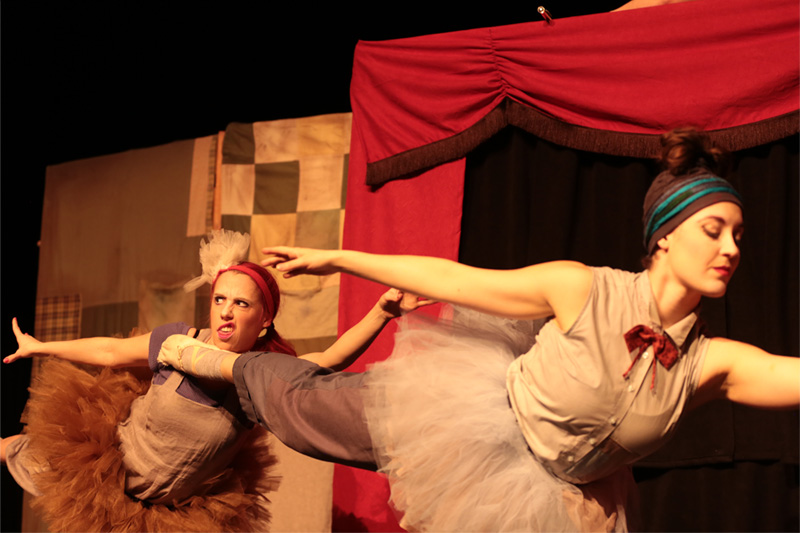 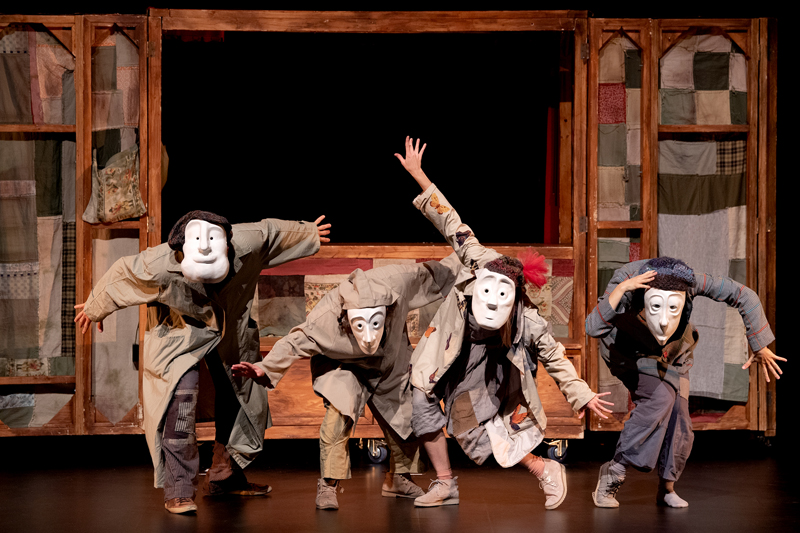 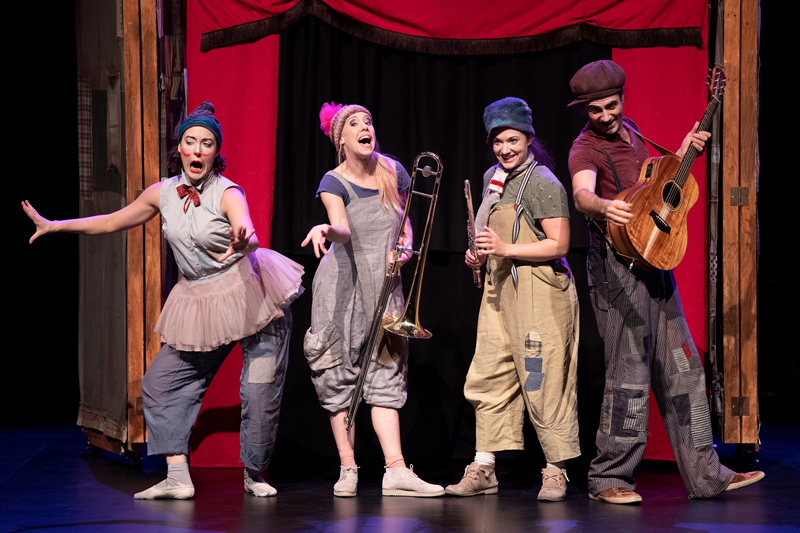 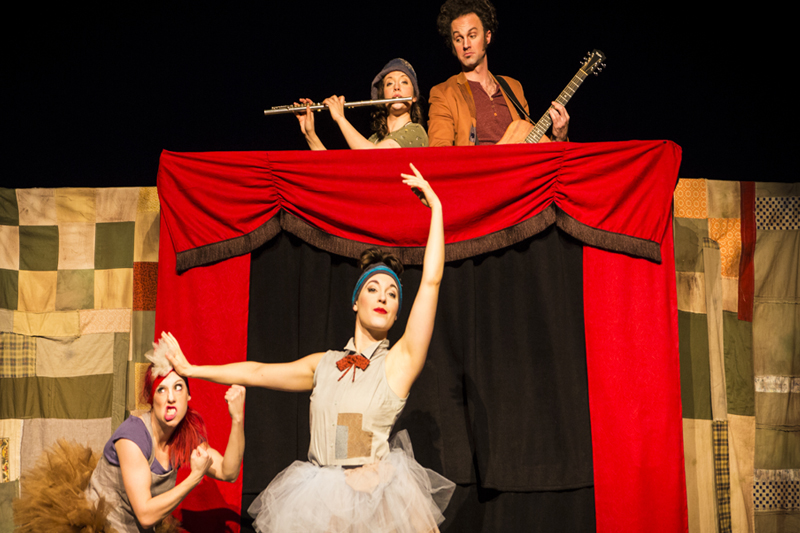 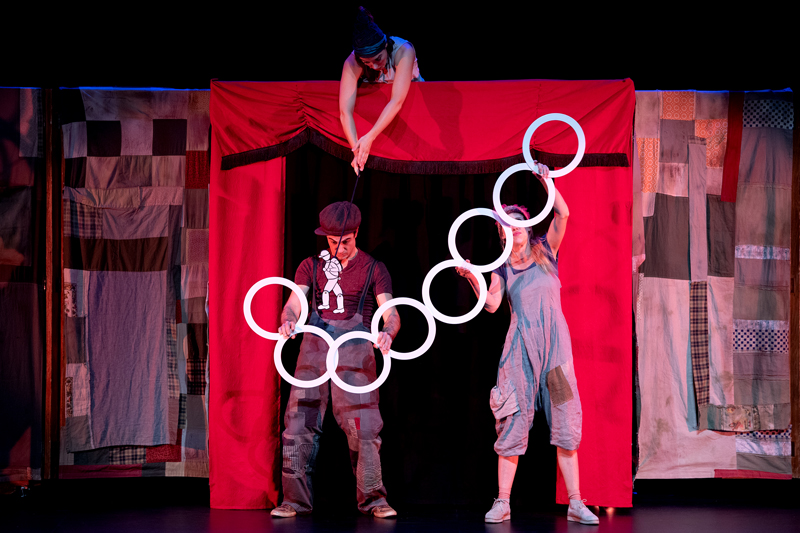 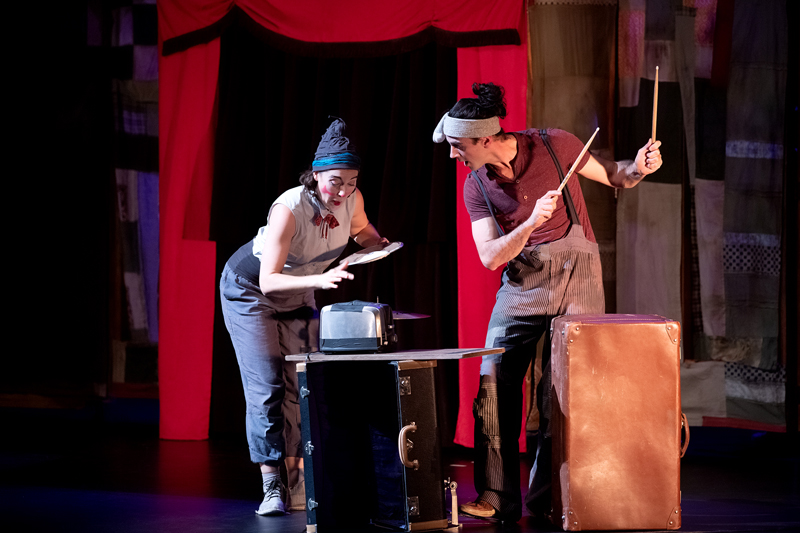 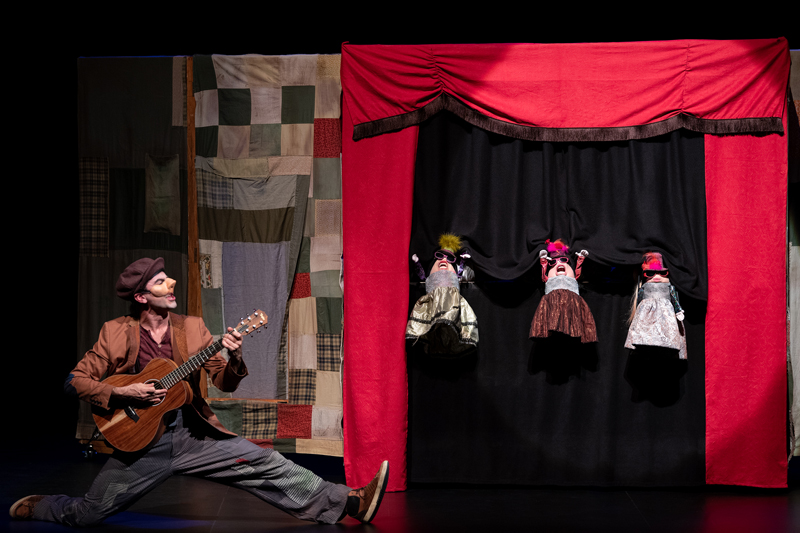 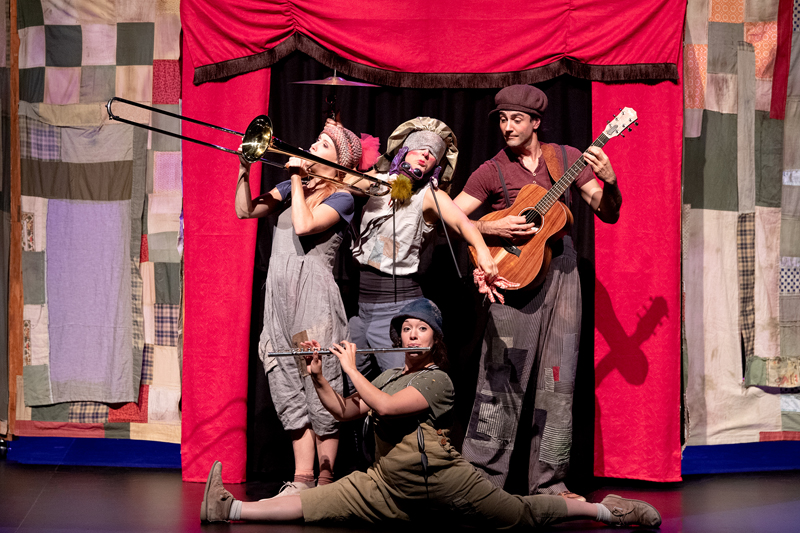 Clownesque fable about the strength of friendship.

Four artists arrive in the night at the place where their show is to be presented. They fall asleep only to discover upon waking that their audience is already there. The show begins, but things get all mixed up: day-to-day life interferes with the performance, forcing it down a new, unpredictable path.

In these artists’ hands, everyday objects become tools to create a quirky universe, sometimes bordering on the absurd. The characters let their imaginations run wild to the point where they even lose sight of reality for a while. They dive head first into the unpredictable, with virtuosity guiding their fantasy.

And that’s where the real journey begins: for these four pals, time is a great travel companion that sparks their curiosity, stimulates their sense of awe, and enhances their tremendous joy in being together. One thread leads to another as they weave the present moment, driven by their uncontrollable whimsicalness and overwhelming desire to share their adventure with the audience.

Louise Tresoor, 20 octobre 2019
"I saw Ripopée this afternoon, in Kenora, ON, with my 4 year old granddaughter. What an AWESOME show! This was one of the best shows I have seen. So imaginative and varied and SO FUNNY. Children and adults alike were captivated." 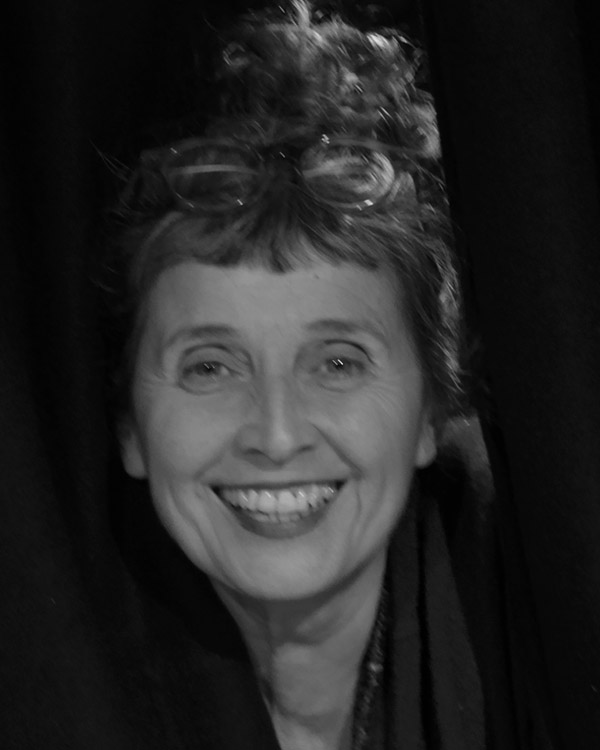 Christine Rossignol began her professional career in Tours where she first interpreted characters from the classical repertoire. She made her debut with the company Champ Libre, writing shows to be presented in different settings (streets, rooms, shop windows, etc.). In 1983, she moved to Paris where she worked as an actress and clown, mainly with the companies Extincteur, Les Applicateurs and La Revue Éclair. In 1990, she co-founded the company Contre Pour with Michel Dallaire and staged many shows that toured all over Europe and on this side of the Atlantic (including Les Hommes en Noir, Circo Bidon, Cie Wure Wure, Cirque Éloize, and Hop la Circus). All while continuing writing and staging, she has also performed in various shows (Les Girls, La Circonférence de Rien, and Gold and Finger, among others).
Christine has since taken to exploring clowning and the writing process while creating shows for both the theatre and the street. In 1997, still working as co-director alongside Michel Dallaire, she founded the Hangar des Mines, a world-renowned clown training centre. She worked there from 2004 to 2016, staging many shows and teaching the sensitive clown. Christine joined the L’Aubergine family in 2009 during the creation of Burletta, which she co-staged with Michel Dallaire and Paul Vachon. From 2013 onward, her collaboration with the company intensified. Since then, she has been involved in the creation of Ç4 D3M3N4G3, TerZettto, Burletta à 4 temps, DODÉ, as well as Ripopée. Christine Rossignol was artistic director of L'Aubergine from 2014 to 2018. 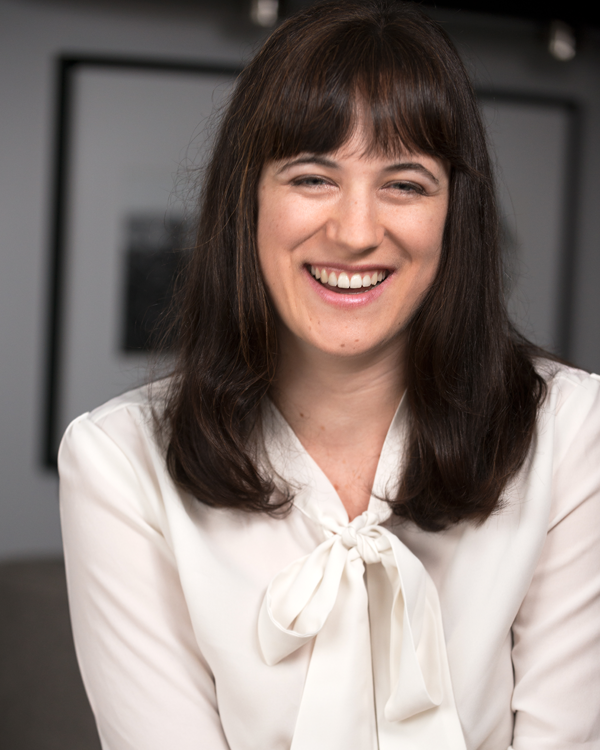 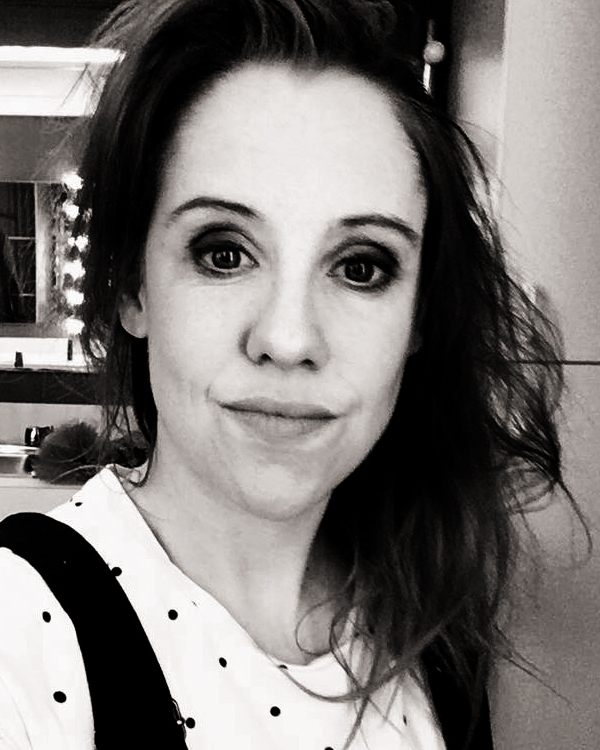 Ariane Cabana discovered a passion for the performing arts as a teenager and quickly became interested in clowning. As her interest grew, she took clown lessons with Yves Dagenais. She has also practiced figure skating for seven years and holds a second-degree black belt in Tae Kwon Do. Her sports background is clearly a major asset as it gives her the strength, agility, and flexibility she needs for the trade.

Ariane has worked for Quebec’s major circus companies, including Cirque du Soleil, Cirque Éloïze, Cirque Akya, and Les Parfaits Inconnus. The clownish duo Caberlion, which she formed with Philibert Hébert-Filion, has appeared on TV shows including La Vie est un Cirque on TV5 Monde, and is acclaimed throughout the province and beyond. 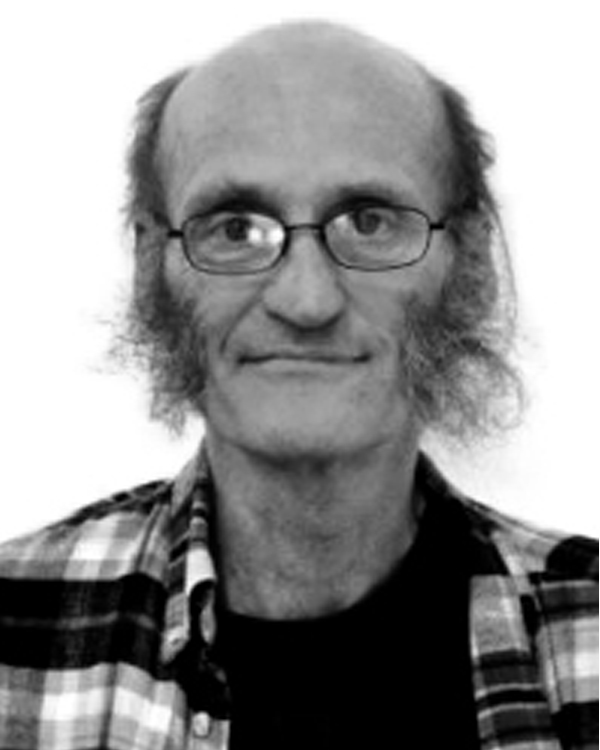 
Michel has taken several courses in Quebec, Canada and in France. He has played in the theatre, taught the art of the clown and also founded La Bébelle (Sherbrooke), The Ratatouille (Vancouver), Les Hommes en Noir (France), and has worked for many other troupes in the US and in Europe. He was responsible for the educational principles of training module used for clowning/music/staging in Le Hangar des Mines, a place where national and international artists are trained in the art of the clown, in addition to transferring his know-how to other organizations.
Michel Dallaire has been collaborating with L’Aubergine for many years. Along with Christine Rossignol, he is also behind the successes of Burletta and TerZettto. 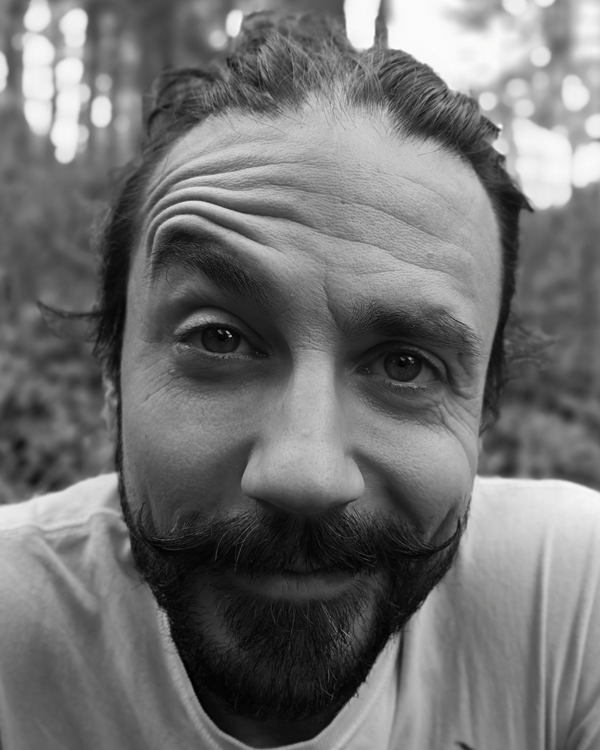 A drummer and percussionist by training, Félix Imbault discovered a passion for acting and the art of clowning when he happened upon the street arts and theatre. He immediately fell in love with what he saw and took it upon himself to get training from the masters, including Francine Côté, Yves Dagenais and René Bazinet. He later decided that he wanted to dedicate his career to clowning, performance and audience engagement and went on to found his own street arts company in 2014. His work led him to perform across Eastern Canada, from Toronto to Gaspé, and occasionally abroad.

A multidisciplinary artist skilled in music, clowning, stilts, juggling, acrobatics and marionettes, he creates magical moments for his audiences, full of surprises from his unique universe. 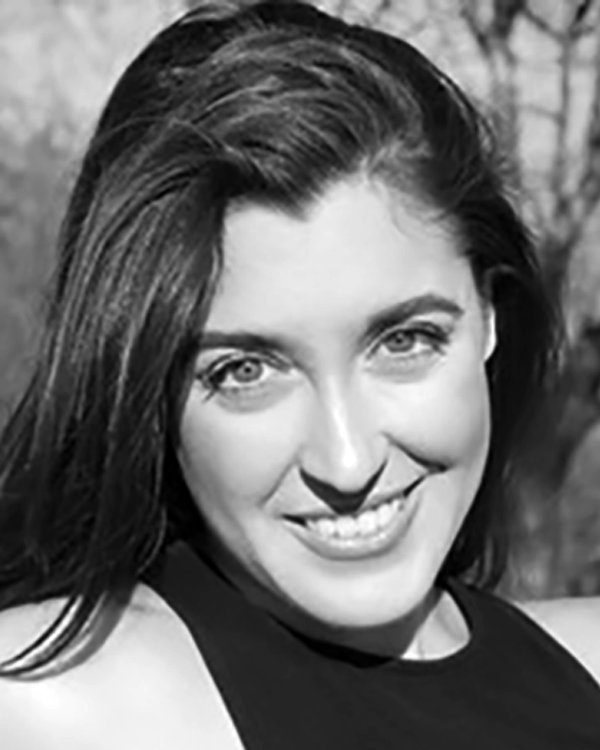 Vanessa grew up living in New York City, Madrid and Quito. She started dancing at the age of 4 and pursued her stage and dance training at the Centre d’Excellence Artistique of De La Salle High School and The School of Dance in Ottawa. She later completed a B.F.A. in Contemporary Dance and Business at Concordia University (2011). Having discovered the art of clown, Vanessa completed the full-time program of the Francine Côté Clown and Comedy School, and later trained with Joe de Paul and Yves Dagenais. From then on, Vanessa has dedicated her artistic career to clowning on and off stage. Her endeavors have brought her to perform on America’s Got Talent and other television shows and festivals internationally. Equally as passionate about community arts, Vanessa has taught clown and dance in Cambodia at the Phare Ponleu Selpak Circus (2012), in Melbourne with e.motion21 (2013) and in Igloolik, Nunavut with Artcirq (2016-2018). With a burning desire for adventure and true love for comedy, Vanessa continues pursue her endeavors in the wonderful world of clown. 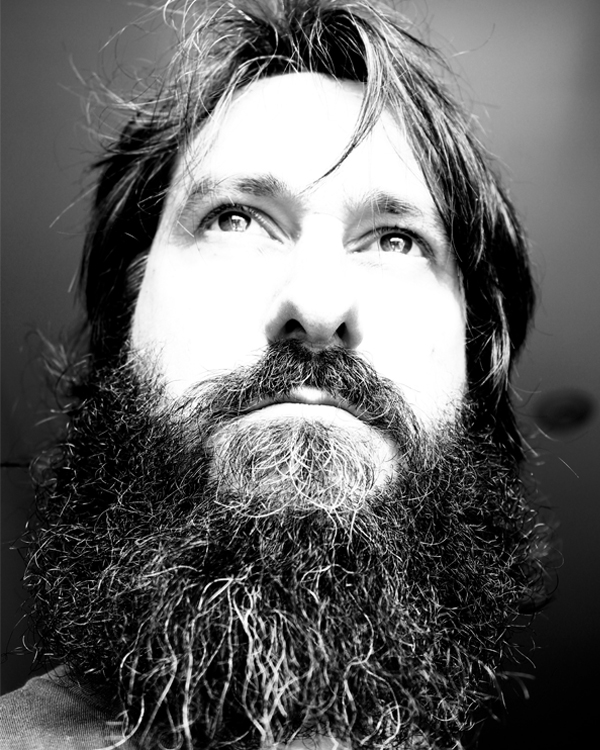 A self-taught musician and multidisciplinary artist, Fred Lebrasseur has been exploring the world of percussion since he was a child. A creator of unique sound universes, he composes, directs and improvises with different musical styles in several music formations. He is a musician-composer for the theater (Robert Lepage), puppetry (Pupulus Mordicus), animated films (the NFB, Kiwistiti), visual arts (Claudie Gagnon), circus (Machine de Cirque), and dance.

Born in Gaspésie and the son of a pedagogue, he teaches musical creation workshops around the world to diverse audiences, including children, professional musicians, circus performers, and theatre actors. Fred Lebrasseur has performed in over 25 countries. 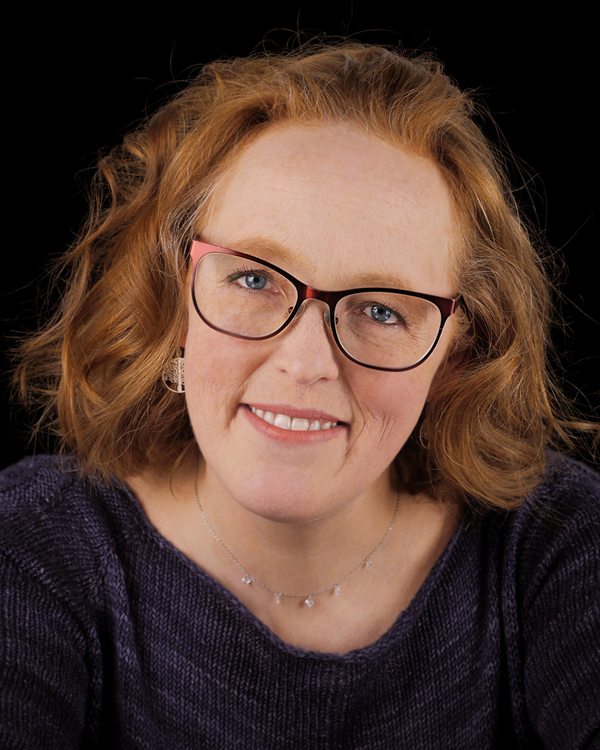 After studying production at CEGEP Lionel Groulx in the Theatre program, Emilie served as Stage Manager for Quebec companies and Assistant Director with instructors and trainers in the art of the clown. She took care of stage management in places such as the Cabaret du Capitole and the Théâtre de la Bordée, and similarly for events such as La Bourse Rideau and the Festival d'été.

For l'Aubergine, Emilie has participated in several shows including DADA, Burletta, Aaatchoum!, Staccato, Nwolc and La Crèche Vivante. Currently acting as Executive Director of L’Aubergine, Emilie Vachon nevertheless continues to exploit her technical knowledge by designing the lighting effects for the latest productions.